Thanks to hydrogen, the energy transition will become much easier

It’s the age-old chicken or the egg dilemma. Hydrogen is an extremely clean fuel, but as long as there’s no supply and infrastructure available, motorists and truck drivers won’t make the switch. Naturally, without customers, there’s no interest from investors to produce fuel cells, install gas stations, or convert existing pipeline networks.

Home   |   Success stories   |   Thanks to hydrogen, the energy transition will become much easier

"Thanks to hydrogen, the energy transition will become much easier"

Working for hydrogen supplier HYGRO, Jan Willem Langeraar considers this his main challenge. How do you actually speed up the production of hydrogen? The answer is simple: by taking direct action. “We have to change the mindset of users, governments, and gas station and wind turbine operators. The technology for hydrogen-operated cars and trucks already exists and works, but unfortunately, good infrastructure and business models are missing. It should be no surprise that there is a lack of customers. Our aim is to break through this impasse.’’

The idea is to use electricity from wind turbines (first on land, then at sea) to convert water into hydrogen via electrolysis. With offshore wind, sustainably-produced hydrogen will be brought ashore via a high-pressure composite pipe and subsequently be used as green transport fuel.

In order to test this concept, a consortium led by HYGRO is currently building the world’s first hydrogen windmill on the wind turbine test field of research institute ECN in Wieringermeer.

The windmill is expected to start operating by 2020. The intention is to supply clean fuel for 5 hydrogen filling stations and 100 trucks. The windmill’s turbine currently features a combination of two technologies. All generated electricity is directly used for electrolysis, the technology that separates water into hydrogen and oxygen. The sustainably-produced hydrogen is then used in so-called fuel cell electric trucks, which use hydrogen as an energy source instead of a battery.

“The only residual products are water vapour and heat. In other words, any direct emissions are free from harmful substances. In the long term, provided we can effectively scale up, hydrogen fuel is also cheaper and more efficient than electricity. It may even be used as a substitute for gas in homes in the future. I believe using hydrogen and wind turbines in this way will significantly facilitate the energy transition,’’ says Langeraar. 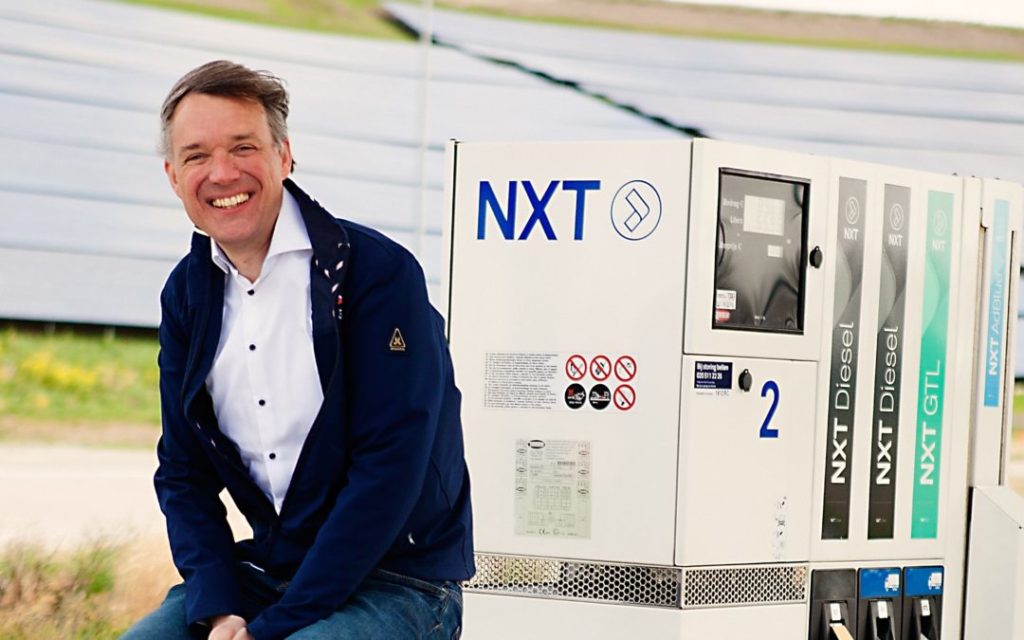 When moving towards a breakthrough of hydrogen technology, large-scale production is very important, emphasises Langeraar. “Fuel cells will only become cheaper if we can produce them in large numbers. We have to go beyond the so-called dead centre.’’ At the same time, in order to create demand, the user side must also be addressed. “One cannot exist without the other.’’ Fortunately, the first important step was already taken in 2018. As the first town in Noord-Holland, Alkmaar will receive a hydrogen filling station at the current GPXT NXT filling station in the Boekelermeer business park. Thanks to a so-called DKTI subsidy—a subsidy scheme for companies involved in sustainable transport solutions and reducing CO2 emissions—the project can now officially commence. 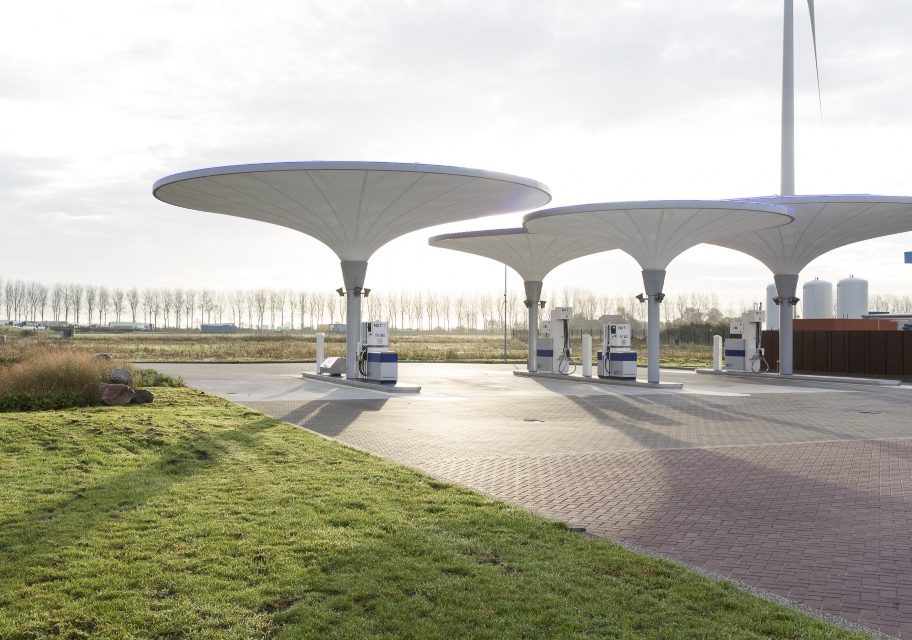 The hydrogen windmill is part of the Duwaal project in Noord-Holland. Duwaal is currently working on the development of a green hydrogen economy in the Holland region north of Amsterdam. This project was set up by a group of companies, including HYGRO, and is supported by the New Energy Coalition and Ontwikkelingsbedrijf Noord-Holland Noord.

“We jointly and simultaneously want to coordinate the supply and demand of hydrogen,’’ explains Langeraar. “It is precisely in Noord-Holland where there is sufficient knowledge and infrastructure available to make the project a success. For example, take the gas pipes that enter the province near Den Helder, the offshore wind farms, the knowledge we have thanks to ECN, the Wieringermeer test field, and the many suppliers. Not to mention, I’m convinced a fantastic synergy is possible with composite companies and incubators such as Investa. Indeed, this region is ideal.’’

Ontwikkelingsbedrijf Noord-Holland Noord provides Langeraar with support on a number of fronts. “Our collaboration is successful. It’s thanks to them that we ended up in Noord-Holland and came into contact with many important regional parties, including the Port of Den Helder, Marine, ECN, local municipalities, GP Groot, and other interesting companies. They also introduced us to IDEA, where we now have our offices. We’ve been able to establish many relationships.’’

Our collaboration with Ontwikkelingsbedrijf has also opened up a few unexpected doors. “For example, they brought us into contact with the data centres in Agriport. These centres may also benefit from our technology. They now rely on large diesel aggregates for the supply of emergency power. Diesel is expensive and produces a lot of harmful emissions. Fuel cells may be an interesting alternative here, especially if we can produce them on a large scale and make them therefore cheaper. There seems to be interest, and it’s certainly feasible from a technical perspective. However, before all of this can become a reality, there is a great deal of government regulation to deal with. Not to mention, the introduction of fuel cells must become sufficiently cost-effective.

Naturally, there are still many challenges to confront. Nevertheless, Langeraar is optimistic. “It wouldn’t surprise me if, in ten years, all trucks will run on hydrogen. All over the globe, tests are currently being conducted to stimulate the use of hydrogen technologies. In America, there are tens of thousands of forklift trucks that run on hydrogen for Walmart and Amazon alone. In Asia, Toyota and Hyundai are building large factories for the production of fuel cells. In Switzerland, Hyundai has introduced 1,600 hydrogen trucks on the road in just four years’ time. Why shouldn’t this technology become a success in the Netherlands?’’

The newly installed Dutch government has started with an ambitious coalition agreement. In the existing roadmap 2023-2030, 11.5 GW Offshore Wind is planned. Recently an additional 10 GW for 2030 was announced. On top of this, the new coalition agreement, stated an extra ambition of 6 GW until 2030. Therefore a total of 27.5 GW by 2030 is planned. Most of these wind farms will be located off the coast of North Holland, where we fully embrace these new opportunities and together work on capitalizing them.
Why invest in NHN

In the coming decades, the growing global population and increasing prosperity will put even more pressure on the global demand for energy, food, and water. Region North of Amsterdam is renowned around the world for its innovative solutions in these sectors.
Why invest in NHN

Businesses in Noord-Holland Noord have strong R&D divisions in key sectors such as Energy, Agri & Food and Offshore & Water. Combined with its existing knowledge and science institutes, the region is firmly focused on innovation.

Noord-Holland Noord we are together. And together we go for growth. Development Agency NHN is there for all entrepreneurs. Your ambitions, our challenge.

This website uses cookies to improve your experience while you navigate through the website. Of these, the cookies that are categorized as necessary are stored in your browser, as they are essential for the operation of basic functionalities of the website. We also use third-party cookies that help us analyze and understand how you use this website. These cookies are only stored in your browser with your permission. You also have the option to opt out of these cookies. But opting out of some of these cookies can affect your browsing experience.
Necessary Always Enabled